Forge Roundabout will be closed to traffic, except traffic leaving the M54, between 8pm and 6am on Monday the 6th and Tuesday the 7th of November. Traffic wishing to access the M54 at Junction 5 will be diverted to Junction 4. Traffic will still be able to exit from the M54 on to Forge Roundabout, however all traffic leaving the M54 will be diverted along Rampart Way towards Hollinswood Interchange. Marked in red on the map below.

Hollinswood Interchange will be closed to traffic between 8pm and 6am on Wednesday the 8th, Thursday the 9th and Friday the 10th of November. Access to Telford Central railway station will be available via Priorslee Roundabout, the A5 and the bus lane into Euston Way. All traffic will be permitted to use the bus lane into Euston Way during this overnight period. Traffic leaving the railway station area will exit via Euston Way onto Hollinswood Interchange, however all traffic will then be diverted along the A5 to Priorslee Roundabout. Marked in blue on the map below. 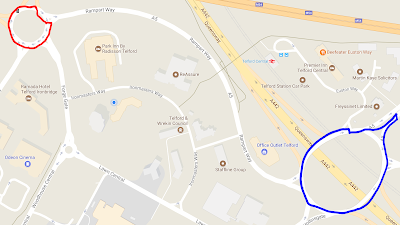