Telford & Wrekin could be a leader on electric vehicle infrastructure

As an electric car owner I'm clearly going to have some bias but I genuinely think electric vehicle charging points are a worthwhile investment for local councils.

Yesterday we went for a family day out to the seaside. We ended up going to the north coast of Wales and that decision was based purely on the availability of electric charging points for my car. We were initially looking at Barmouth - the usual destination of Shropshire day trippers - but dismissed it because there aren't enough fast chargers on the way.

Now, there aren't that many electric cars on the road (but more than you think) but the number is increasing and will continue to increase exponentially as UK and EU legislation drives the change from petrol/diesel vehicles to electric. Towns that are accessible to owners of electric vehicles will benefit from tourists and shoppers who make the switch. Asda have installed charging stations at many of their stores to attract shoppers and Lidl recently announced that they will be doing the same. Ikea have charging stations at most - if not all - of their stores. Clearly the cost of installing these charging points and in many cases paying for the electricity consumed is outweighed by the number of shoppers is attracts.

We have a UNESCO World Heritage Site in the borough which attracts well over half a million visitors to the Ironbridge Gorge museums. Telford is well connected to the road network and there is a fast charger at the motorway services at Shifnal which makes a trip to Ironbridge and Telford possible for an electric car owner but our town of 165k people with its world famous tourist attraction and one of the country's largest shopping centres has facilities to fast charge just two cars at a time. The other chargers in the town are too slow to be of use to visitors and the risk of a fault on those two chargers leaving a driver stranded will put many prospective electric car driving visitors off.

There is, I think, a clear economic benefit to be gained by Telford & Wrekin Council incentivising the installation of electric charging infrastructure by SMEs in the borough through business rate relief and filling in the gaps itself. There are lots of incentives to be had at the moment whilst the industry is in its infancy and Telford & Wrekin could be in an excellent position to capitalise on the opportunity whilst other towns and cities in the region are caught on the back foot. 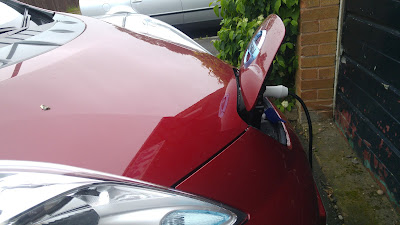