Is it right to charge double for decaffeinated drinks?

This week I ran out of tea bags at work. This is serious stuff. So I called in at Tesco in Madeley on the way to work to buy some more. I would normally buy tea bags from Aldi but they have decided - for reasons that nobody appears to be able to explain - to "regionally discontinue" their own brand decaffeinated tea bags and not stock any alternatives*.

So I went to Tesco, found the tea aisle and was disappointed to find that they were charging more for PG Tips decaf tea bags compared to the caffeinated version. Not just a few pence but a third extra for a box of 40 and more than double for a box of 160.

I ended up buying a different brand that didn't overcharge for decaf but I was annoyed so I called Tesco customer services to try and find out why. They blamed PG Tips for setting the price higher but assured me they would make sure my feedback got to the right people (yeah, right). So I then called PG Tips and spoke to a very helpful man who sympathised entirely with my complaint as his intolerance of caffeine isn't limited to headaches and shakes but to full blown uncontrollable gastric activity. He checked thoroughly and said that they don't set a recommended price for anything they sell to Tesco and that it is entirely down to Tesco to choose how much they charge. So I'm going to write to Tesco now and see what they've got to say for themselves. I suspect they will make sure my feedback goes to the right people and the price of decaf tea won't change.

The above is a little tongue in cheek but it is something that annoys me. Some people choose to forego caffeine for health reasons, some don't get on particularly well with caffeine and others get quite ill if they consume it. I'm a mixture of the first two - I can drink caffeinated drinks in moderation but not all the time so rather than subject my body to something it doesn't like I drink decaf where possible. But choice is limited and it can be more costly which is a little unfair if you have no choice but to drink decaffeinated drinks. It is difficult to find decaffeinated Coke and Pepsi in Telford despite it being something that those companies make in large quantities. You can't even buy it from the local wholesalers and consequently smaller shops are unable to stock it, even if they're willing to as our local shop here in Brookside was when I asked. Decaf tea and coffee is easier to come by but supermarkets often make you pay extra and if you ask for a decaf tea in many places they look at you like you've asked them for some obscure drink that can only be found on a remote island in the Pacific Ocean.

Is it too much to ask that decaf drinks are as freely available and similarly priced to caffeinated versions and that supermarkets don't try and pass the buck when putting a big margin on a product that many people have no choice but to buy? 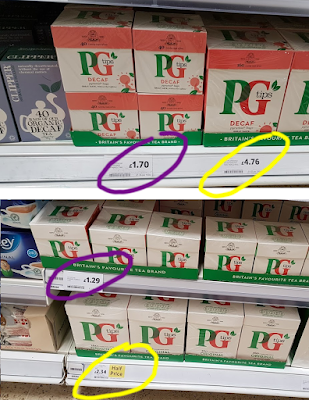 * Tetley decaf tea bags appeared at Aldi in Madeley after I phoned them up last week to find out why they no longer sold decaf!
Posted by wonkotsane at 19:34

The police will be outside Brookside Central today offering free "CRE Mark" security stickers for bikes.

Head down there with your bike between 10am and noon and they will fit the sticker and register your bike for free so that if it is ever lost or stolen it can be easily identified and traced back to you. 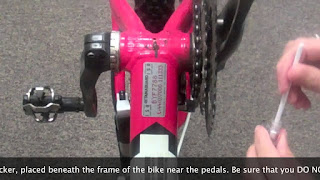