More fly tipping has appeared behind the mobile phone mast on Brookside Avenue between Briarwood and Stirchley Road. This is the second time in the last couple of weeks that rubbish has been dumped here. 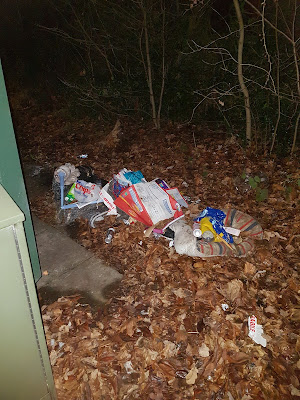 I also reported loose steps by Reynolds House earlier today. These are the steps that lead up to the footbridge that goes over the town centre ring road to where Asda used to be. The top set of steps were blocked off some time ago because they came loose and filled in with soil to make a lovely planter full of weeds.

After stepping on one step that tipped up when I stepped on it I check some others to find that a lot of them were loose. An officer was being sent to inspect them this afternoon. 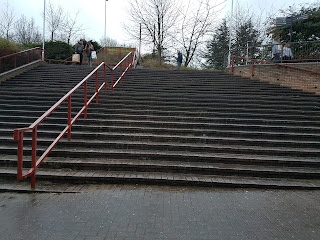 Finally, I have had a response (after complaining to the Chief Executive of the council) to my numerous reports of possible subsidence on Holyhead Road at Snedshill. They have now inspected the road and decided that a utility trench is failing but because the area of road that needs fixing is more than 100m² they have to apply for capital funding in next year's budget. I have passed this on to my colleague +Thomas Hoof who sits on St George's & Priorslee Parish Council so that they can apply some pressure on the council to ensure the work is funded next year.
Posted by wonkotsane at 23:03