Telford & Wrekin Council have put an emergency 40mph speed limit in place on the A442 between Stirchley and Hollinswood after a routine inspection found the crash barriers around the bridge supports wouldn't withstand a 60mph collision.

For once the council have imposed a speed limit that makes sense but most people seem to be ignoring it. The speed limit is there for a very good reason - if someone crashes into the barriers at the base of the bridge at 60mph there is a possibility that the bridge could collapse. It's unlikely but the probability is high enough to prompt the council to spend money and put this emergency traffic order in.

The 40mph speed limit signs aren't really adequate which might be contributing to the number of people ignoring the temporary speed limit. There aren't many signs and they're on the grass verge so it's quite possible that traffic in the left hand lane has obscured them from view if the first one has been missed. The speed camera van has been out at Stirchley already just a few yards from the end of the 40mph area and I expect a large number of people will already have tickets in the post.

I have written to the council about the poor signage and hopefully they will be more interested in encouraging people to stick to the 40mph limit than letting the speed camera van catch people due to inadequate signage! 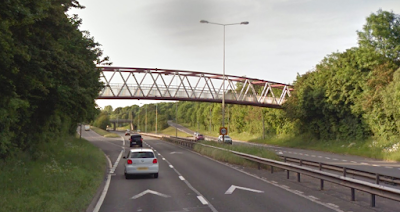