I had a tiring but entertaining day at Wolverhampton racecourse today at the UKIP West Midlands regional conference.

The line-up of speakers was excellent with (amongst others) our disabilities spokesman Cllr +Star Etheridge from Sedgley, St Georges Parish Councillor and West Midlands Young Independence Chairman +Thomas Hoof, Flo Lewis from Tern Hill who is Chairman of LGBT* in UKIP, Imam Aqeel Kang from the Ahmadiyya Muslim Community, our three West Midlands MEPs Jill Seymour, +Bill Etheridge and +James Carver, the Grassroots Out campaign, Deputy Leader of UKIP +Paul Nuttall and of course the man himself, +Nigel Farage.

The timing of the conference was perfect with David Cameron announcing that the EU referendum will be held on 23rd June this year, the minimum possible time he is able to hold it in. With as many as 8m illegal immigrants expected to arrive in Europe this year and European economies tanking he knows that dissatisfaction with the EU is only going to increase so he wants the referendum out of the way before things get any worse.

We pay £55m a day for the privilege of having three quarters of our laws made by unelected bureaucrats in Belgium. We have some of the most deprived wards in the country in Telford and the money wasted on the EU would be better spent at home than building motorways in Romania, sewerage systems in Hungary and an underground railway in Poland. 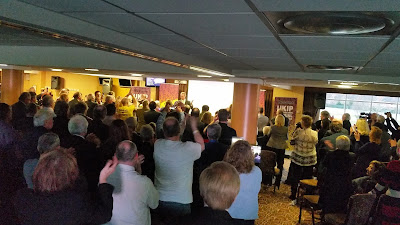