Earlier this week I was contacted by a resident who had witnessed contractors working for Telford & Wrekin Council dumping the gravel from the pavement they were digging up over the crash barrier opposite Brereton and then trying to cover it up with branches from the trees.

I contacted the council to let them know what had happened and got a fairly prompt response from a council officer who had spoken to the site supervisor who had told him that the workmen had "incorrectly" put it there overnight because their skip was full. I asked him if they had offered an explanation as to why they might have "incorrectly" broken off branches - some of them requiring a significant amount of effort such as jumping on them because it was new growth - to try and cover it up if it was a genuine mistake. I then received a further response to say that he had spoken to them again, the site foreman had been disciplined and they apologised and gave assurances that it wouldn't happen again.

If any mysterious piles of gravel appear around the estate where the pavements are being worked on, please let me know! 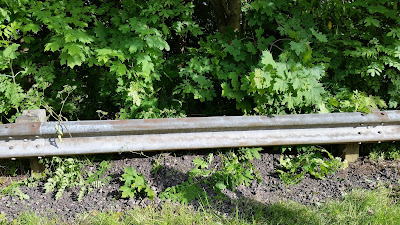