This morning I was having surgery on my knee (again) and this afternoon I was back on councillor duties!

This afternoon I have reported an overflowing bin next to the leaning bus stop opposite Briarwood, spoken to the company managing 112 Burtondale which is plagued with fly tipping and been briefed on "Project Depression" which is a project to tackle the collapsing roads around the borough.

I don't know when the overflowing bin will be emptied but it should be done within 24 hours.

112 Burtondale is a bit of a tricky one. The company that is managing the property on behalf of the reluctant owner is based in Essex and they say they can't get it cleared up for another couple of weeks. I have left them a message letting them know that it's being fly tipped regularly and the longer they leave it, the more they will have to clear up assuming it doesn't get set on fire in the meantime. I suspect they might find someone to clear it up a bit quicker than the second week in June!

Project Depression is a project to sort out the collapsing roads around the borough, including (but not limited to) Castlefields Way by the traffic lights outside Aqueduct Primary School, Parkway between Aldi and the Court Street traffic lights in Madeley,, Dunmaster Way in Stirchley, Colliers Way outside McDonalds by the Forge Retail Park, the A4169 by the care home at Lightmoor and the road into Kynnersley. The council have a geophys technician investigating the problem sites to find out why the roads are collapsing and which sites are a priority. Those priority sites will be addressed this year once money has been found to pay for it.

In the last few days I've also reported two lots of fly tipping in Beaconsfield, one on Brookside Avenue by the Briarwood/Birchmore underpass and another on Parkway by St Mary's Primary School in Madeley. I've also reported an abandoned shopping trolley on the footpath alongside the A442 by Telford Central train station. 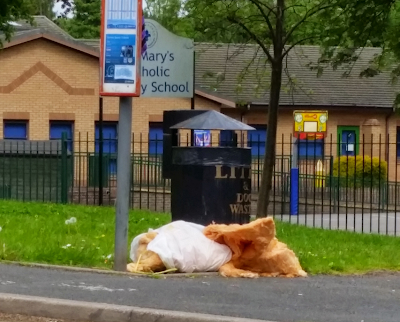