The traffic island "improvements" around the town centre are dangerous

I have sent the following email to Telford & Wrekin Council regarding the dangerous new layout of the Forge Roundabout (the M54 island by the Park Inn) and the island at Malinsgate by the Bridge Builder.

I spoke to someone at Highways a week ago about the new road layout on Forge Roundabout but I've yet to receive a response. I'm told by the Mitie shuttle bus drivers that they're seeing near misses daily on that island and every time I've been on it it's chaos because the lanes don't make sense and they have the dangerous short second lanes as you exit the roundabout that the council have been hatching out elsewhere in the borough. I appreciate that the Highways Agency are responsible for the island but the council approved the plans and the new layout is dangerous. I am going to write to the Highways Agency myself but obviously the council's Highways department are the people who should be getting it addressed.

I am also concerned about the island near the police station at Malinsgate which has recently had traffic lights installed. The island is too small to hold traffic at lights and that is evident by the amount of traffic that is building up around it at busy times. At lunchtime today the traffic was queueing from the island, past the Land Registry, over Hall Park Roundabout and half way to the Forge Roundabout. The road past the police station is closed of course but the volume of traffic is the same and the island must have been gridlocked. I am told by a colleague that it can take an extra 5-10 minutes to travel from Lawley to St Georges in a morning using that island because the traffic can queue back as far as the Old Park Roundabout. The roadworks are not the cause of this traffic, it is a fundamental flaw in the design. The island at Malinsgate is too small for traffic lights and they are hindering the flow of traffic, causing dangerous tailbacks.

Metal thieves have targeted Brookside over the last couple of days, stealing lead flashing from porches and Holmer Lake School.

If you have been a victim of these thieves then please report it to the police on 03003333000 (free on most inclusive call packages) or 101 (15p per call). The more people who report it, the more seriously the police will take the investigation. Scrap lead is only worth about £1.45/lb (65p/kg) which means they're probably making about £10 for each £100 of damage they're causing stealing it from peoples' houses. They have been operating in the area for several days now and not much appears to be happening to catch those responsible. 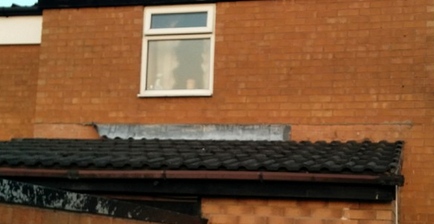 The police are planning a crackdown on speeding motorists on Randlay Avenue, including use of mobile speed cameras.

According to the speed camera partnership over half of drivers break the speed limit on Randlay Avenue and 15% drive faster than 38.1mph. They also say there have been 11 collisions in the area (but not necessarily on Randlay Avenue) in three years and "a high proportion" were attributed to speed.

I'm not a fan of speed cameras at all - they're a lazy way of policing that is more about generating revenue than improving safety. A speed camera is no substitute for a police officer making an informed judgement on someone's driving, it deals in numbers and you can drive as dangerously as you like as long as you stay below that number. You could drive backwards through a speed camera wearing a blindfold and 5 times over the drink drive limit and as long as you aren't breaking the speed limit you won't get a ticket.

The wording from the speed camera partnership is, you will note, very careful. There have been 11 collisions in the area in three years. Those collisions could have been on Stirchley Avenue or Grange Avenue or any of the side roads. There is no mention of the number of casualties (anyone who is seen by a medical professional, even if there is nothing wrong with them) which would suggest there weren't any or that it's very low because that is the speed camera partnership's favourite statistic. They also don't mention the number of collisions that were attributed to speed, just that it's a high proportion which is a strange word to use when you're talking about just 11 collisions. Attributing speed to a collision means that speed could be the only cause of a collision or it might be just one of them. It might be a major cause of the collision or it might be a minor factor where the collision would have happened anyway. It doesn't even mean the speed limit was exceeded, just that speed was a factor.

Having said all that, I'm not opposed to the idea of mobile speed cameras being used on Randlay Avenue or anywhere else but it should be part of a package of measures with actual police enforcement being the main one. I would also like to see enforcement on Stirchley Avenue, Grange Avenue, Holmer Farm Road and Brookside Avenue, all of which have problems with people driving too fast (which is different to exceeding the speed limit). This enforcement should be in place of the speed camera van that can be found on Stirchley Interchange most days catching speeding motorists on a perfectly safe stretch of dual carriageway whilst people are racing past it around the island and on into the housing estates.
Posted by wonkotsane at 20:42

According to the Times, UKIP councillors have the best attendance record of councillors from any other party by quite a margin.

It's not unusual for the Conservatives, Labour and Lib Dems to tell voters that UKIP councillors are ineffective because there are less of them and usually there are only one or two on a council dominated by councillors from other parties but this research shows that if you want a councillor that will work hard for you then your best bet is to vote UKIP.

I don't think Stirchley & Brookside Parish Council publish attendance records for parish councillors but I'm pretty sure mine is close to 100%. From memory I think I've missed two meetings in the 3 years I've been a councillor and I have a meeting most weeks, sometimes more than once a week.
Posted by wonkotsane at 18:55