Police today appealed to a 14-year-old girl missing from Telford to get in touch as fears grow for her safety.

Elise Buckley has not been in touch with her family since travelling with a female friend from Telford to Birmingham city centre on Friday.

Her friend later returned to Telford leaving Elise with a young man they had met up with.  She was reported missing yesterday morning prompting a police search.

It’s now believed Elise may have returned to Telford and her family and the police are anxious to establish she is safe and well.

Detective Chief Inspector Jason Wells, said: “We are appealing to Elise to make contact with the police as soon as possible.  We are also urging anyone else who has heard from her, or who knows of her whereabouts, to get in touch with us.

“We are extremely concerned about her.  Elise is only 14 and as such will be vulnerable.  She was last seen in Birmingham on Friday and as time passes, we are becoming increasingly worried.”

He said Elise comes from Wolverhampton but was staying in Telford when she went missing.

“We have been liaising closely with West Midlands Police who are also searching for her.  Information suggesting she may have been in the Brookside area of Telford, possibly with a man, during the early hours of today, is being followed up.

“However, she is known to frequent Wolverhampton and the Birmingham area, as well as Telford”.

DCI Wells added: “It’s very important Elise contacts the police, or indeed, anyone else who can help us find her, as matter of urgency.  We are concerned about her welfare and anxious to establish she is safe.”

Police asking for witnesses to BB gun attack in Sitrchley

West Mercia Police are asking for witnesses to an incident on Stirchley Lane yesterday where a woman cyclist was shot in the arm with a BB gun from a black Vauxhall Corsa.


A woman cyclist was hit on the arm after a ball bearing gun was fired at her from a passing car in Telford.

Police are seeking witnesses to the incident which happened at around 4.50pm yesterday (Sunday) on Stirchley Lane, Stirchley.

She was not seriously hurt sustaining a small swelling and reddening of the skin.

The 21-year-old was cycling with her partner down Stirchley Lane when a black Vauxhall Corsa coming towards them slowed down.  As the car drew level, the front seat passenger fired the ball bearing gun at her.

A West Mercia Police spokesperson said: “This was an extremely foolhardy and dangerous act which could have caused serious injury if she had been hit in the face.

“We are appealing for witnesses or anyone who knows the identity of the culprit, to contact Malinsgate police station by calling 101.

“Information can also be given to the anonymous Crimestoppers charity, for which a reward may be paid.”

Another arson attack at park by Windmill School

In the last few weeks the park outside Windmill School has been vandalised twice and last night the fire brigade were called to put out a fire there.

A local resident summed it up pretty well:


Think... Whilst the firemen are putting an end to what you see as fun someone could be dying in a house fire or car accident, worse still it could be a member of your family or a friend! Get a life, it isn't funny.

In this kind of weather where the grass and trees are very dry, a small fire can easily get out of control and cause a lot of damage, ultimately putting peoples' lives at risk.

In view of the recent spate of vandalism, arson, bullying and antisocial behaviour at the park I would urge parents to ensure that their children are supervised when they are out or at least to do a spot check every now and again to make sure they're where you expect them to be and not causing any mischief.
Posted by wonkotsane at 16:10

Advance warning of roadworks on A442

Thanks to our hard working Priority Action Co-ordinator, Keith Whitton, we have some advance warning of the schedule of works on and around the A442 Eastern Primary.

Work will take place between Randlay and Stirchley Interchanges from the 29th July to 2nd August and then again from 6th August to 8th August.  There will also be roadworks on the Brockton Loop (aka the trumpet bend) on 1st August.  There is a contingency day built in on 2nd August in case the contractors get behind schedule and another on 9th August.

There is work on Brockton Way (the dual carriageway that goes from the Eastern Primary to the Sutton Hill island by the Texaco garage) between 6th August and 8th August and a bit further up the road there is work on the A442 between Randlay and Hollinswood Interchanges on 13th August.

There will be traffic lights on the Castlefield Roundabout (the mine shaft island) between 29th July and 6th August and on Naird Roundabout (the island with the concrete "needle" by Stafford Park).

There are a few others a bit further away but these are the ones a proverbial stone's throw from Brookside and Stirchley.
Posted by wonkotsane at 15:49 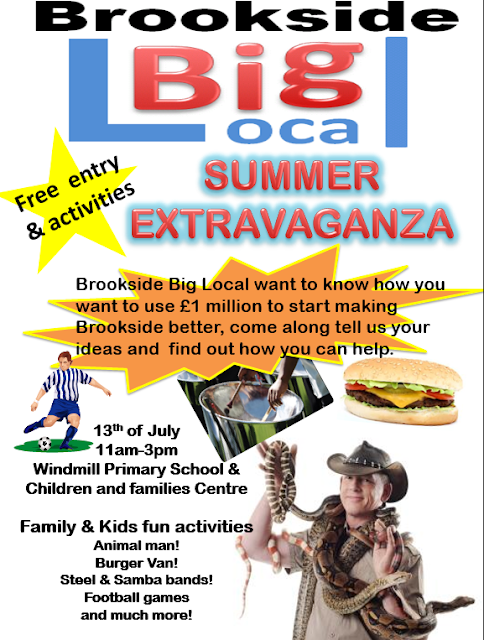 Ryan Laing beat the Conservative candidate who stood as an independent, Grant Foxon, by 331 votes to 206 in Woodside. We believe that the 61.4% vote share may be the new record percentage win in a by-election for UKIP anywhere in the country.

Brookside candidate, Lynda Hogger, also beat Labour borough councillor Nathan England by 442 votes to 322. The 57.85% of the vote Lynda secured is a massive achievement in itself without considering she was up against a sitting borough councillor.

Well done to both candidates, their families, friends and for everyone from the branch and surrounding areas who came to help deliver leaflets and put up posters. We couldn't have done it without the hard work that everyone put in.

Just a reminder that there is a by-election in Brookside tomorrow to replace David Holloway who resigned last month because he's moving out of the area.


UKIP's candidate is Lynda Hogger, a local resident who has been involved in many local charities and community projects.  Her only opponent is the rarely-seen GMB trade union sponsored Labour borough councillor for Stirchley, Nathan England.