The timing was perfect as it happens because the impending election in Brookside (4th July, don't forget to vote) highlighted to me once again what a nonsense it is for the Brookside ward to cross Brookside Avenue.  The two areas are like chalk and cheese and there is no common sense of identity between Holmer Lake, Stirchley and Brookside.  The idea of a separate ward for Brookside without was already forming in my mind prior to the meeting but the proposed single-member ward covering just Holmer Lake doesn't cut it for me so  I abstained on the vote along with Cllr Watkin who also has reservations about the proposal (although possibly different from mine, we didn't get much time to discuss it).

I have submitted the following counter-proposal to the LGBCE for the creation of three wards in Stirchley & Brookside Parish ...

I would like to make an alternative suggestion to that which is proposed for Strichley & Brookside Parish Council.

The current draft proposal is that the area around Holmer Lake should form a single member parish ward of its own with a corresponding decrease in the number of councillors representing Brookside ward by one.

As a current parish councillor for the Brookside ward I understand entirely the need for Holmer Lake to be represented separately to the rest of the Brookside ward.  I make a conscious effort to include the Holmer Lake area and the parts of Stirchley that are within the Brookside ward in everything that I do but the fact that they are so distinct from the Brookside ward both physically and in terms of identity and demographics makes it difficult.  The residents groups and borough council initiatives that are present in Brookside ward concentrate exclusively on the parts of the ward within Brookside Avenue which is a natural (albeit man-made) boundary which is clearly to the detriment of those other parts of the ward.  The needs and priorities of the residents on the inside of Brookside Avenue are so divergent from those on the outside that initiatives and residents groups would find it very difficult to cross that boundary and still be effective and relevant.

In my opinion, the needs of the residents in both Holmer Lake and Stirchley Village would be best served by forming a larger Holmer Lake and Stirchley Park ward incorporating the following:
I absolutely agree with the idea of separately representing those parts of the parish that are distinct from the Brookside and Stirchley wards but I doubt that a single member ward will do much to improve their representation and in all likelihood the councillor returned for that ward will not reside in that ward as it has such a small population.  The above would see three reasonably similar sized wards form the parish with boundaries based along more obvious lines with similar demographics.  It would increase the size of the parish by a few hundred electors by including the parts of the Dawley and Aqueduct ward that fit within the more obvious boundary of the parish but needn't result in additional councillors.

The following is a roughly-drawn suggestion of the new boundaries: 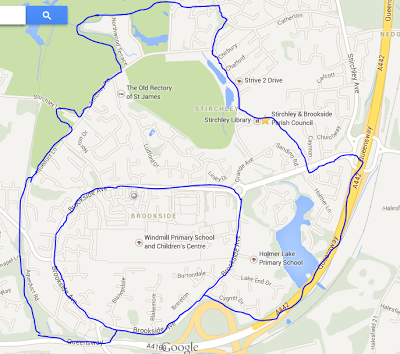 If you would like to submit your own views on the proposal to create a Holmer Lake ward you can email reviews@lgbce.org.uk.
Posted by wonkotsane at 14:40