Last month I asked Telford & Wrekin Council's drainage officers to take a look at the flooded footpath outside the Windmill School gate nearest the netball courts.

It was mentioned again today by another resident so as I had an appointment at the school I went to take a look and took the pictures below.  Purely by coincidence the Head at Windmill School received an update from the council while I was there that someone was due to come out for an inspection this afternoon. 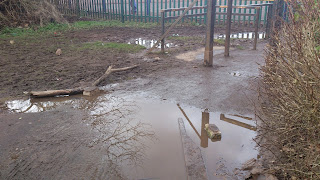