Five months on and still waiting for speed limit signs!

When I first reported the missing speed limit signs on Bridgnorth Road between Tweedale and Brookside, I didn't think that after over five months it might have actually been sorted. 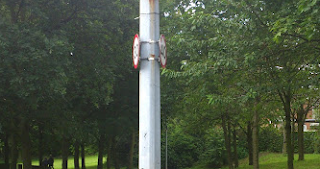 What I find difficult to understand is why nobody questioned the instructions to install two of the repeater signs on lampposts back to back with different speed limits despite the fact that you would never put those signs together.  Presumably the contractors the council used to install the signs are experts at this sort of thing  - you wouldn't call a plumber to repair a car or bake a cake - so it's reasonable to assume that they would know what they were being asked to do was wrong, surely?

It's now over five months since I first brought the missing speed limit signs to their attention and they still haven't fixed the problem.
Posted by wonkotsane at 21:41