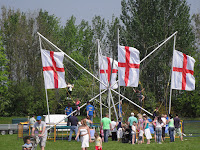 Telford & Wrekin Council's annual St George's Day event is being held tomorrow at the Arena in the Town Park.

It would have made more sense last Saturday as St George's Day was on Monday but it's great that Telford & Wrekin celebrate our patron saint's day and especially with a free event!

The good news is, the weather forecast for tomorrow says that it's going to be dry from 9am onwards so what better way to celebrate the first dry day in a fortnight than sharing some English culture, history and pride?

If you do go (and I hope you do) then you might want to think carefully about what you put on your feet because Mrs P and I went walked through there on Monday and it was pretty waterlogged!
Posted by wonkotsane at 20:54

Grange Park Primary and the Lord Silkin schools are to be merged together and relocated in a new building.

The new school will be built on the opposite side of Grange Avenue to the current schools and be big enough for 1,150 pupils from primary age through to sixth form.


The cost of building the new school will mostly be covered by the Building Schools for the Future (BSF) programme.
Posted by wonkotsane at 20:17

I was called to a meeting at 1st Brookside Scouts' headquarters on Tuesday night along with other parents whose children go to Beavers, Cubs and Scouts there where we were given some very sad news. After 39 years, the group is folding and merging with 1st Dawley Brook, which is based in the grounds of the Phoenix school.


The group is no longer viable for a number of reasons but the two main ones are the state of the building and the lack of leaders to run the groups.

The headquarters is the old chapel on Aqueduct Lane which, whilst a lovely old grade 2 listed building, is in quite a poor state.  The roof has been vandalised many times and because it's a grade 2 listed building, any repairs have to be like for like.  Roof tiles for 200 year old chapels aren't easy to come by and the extent of the damage means a repair bill of around £10,000.  The walls were damp-proofed back when the Scouts moved in but the damp is coming in through the walls now and up through the floor when the building has warmed up in the winter.  This isn't too much of a problem though because it's virtually impossible to heat the building.

Buildings can be repaired and there's an outside chance the group could raise the funds needed to get the building repaired but it wouldn't solve the main problem which is that there aren't enough leaders to run the groups.  The District Commissioner, who is responsible for Scouting in the whole of the Shropshire Severn and Teme district has been running Scouts in Brookside for the last few months but he can't continue to do it, he has too many other responsibilities.  Cubs and Beavers is reliant on four members of the same family which is far from ideal.

It's a real shame to see 1st Brookside Scouts come to an end but there is nothing anyone can do to save the group.  The Chairman and committee have done everything they possibly can to try and save the group and it's a testament to their hard work that it's lasted as long as it has.

According to the Daily Express, Shropshire is likely to be declared a drought zone soon which begs the question: why is Severn Trent planning to sell water to East Anglia in the middle of a drought?

The botched privatisation of the water network gives us the worst of both worlds - consumers have no choice which water company they want to use which means they don't have to worry about providing a good service or keeping down bills and they control the distribution network as well as the water which means there is no joined up national network.


If water had been privatised properly like gas and electricity, Severn Trent wouldn't be the ones "producing" the water or pumping it down the pipes and they wouldn't be in a position to sell it to other companies leaving us in Shropshire at risk of drought.

If water had been privatised properly like gas and electricity, if Severn Trent does sell too much of our water and we end up with a drought we would be able to show Severn Trent our displeasure by changing to another supplier.

But it hasn't so we can't and we therefore have to just sit back and watch Severn Trent pump millions of gallons of water out of Shropshire and wait for the hosepipe ban.  And you can pretty much guarantee that the millions that Severn Trent will make out of selling our water to Anglian Water won't knock a penny off our water bills.
Posted by wonkotsane at 21:32

This Saturday we have a gathering, an open mic for anyone who lives in or has strong connections with Brookside. It will be from 5 till 8 at the community centre and is a place for our songs, stories, poems or dance, for any age.


Personally, I believe that when you get to know any community there are things of beauty and meaning within it. Brookside is no exception, and among the talented people hoping to come are two of the members of the band Thomson oldeman, currently being played as Radio Shropshires song of the month...you can hear why here...

http://m.soundcloud.com/thomsonoldeman/sets/thomson-oldeman-ep/
just as important though as our talent is that we come together to share, to spend time with each other. Hope to see you there.