Tonight's regeneration meeting was really positive with about 70 people turning up at the community centre to talk about how Brookside residents want regeneration to happen.

The meeting was led by Brookside Improvement Group with Telford & Wrekin Council and Wrekin Housing Trust providing the logistical support and facilitators.  Two young ladies from the youth club came to give us the views of young people that they'd gathered - they were very nervous but did an excellent job!

I couldn't hear a lot of what was being said in our little working groups because I have a hearing aid and there was too much background noise but I muddled through by reading what was being written down and a bit of lip reading.  The accoustics in the hall in the community centre are terrible - it's something that realy needs to be addressed when the centre is renovated.  So if anyone was talking to me tonight and I either didn't answer or looked vacant, I wasn't being rude!

There was some really excellent feedback from the meeting and everyone involved was keen to emphasise that this is only the first phase of the regeneration consultation process and there is a lot more to come.  The next phase is a series of workshops to start coming up with some firm plans that can be turned into reality.  This regeneration is really happening and it's happening now.  Everyone in Brookside can help shape the regeneration but only you can take advantage of the opportunity.  If you want to get involved you contact Keith Whitton on 382182 or in person at the community centre.
Posted by wonkotsane at 22:39

This is a final reminder for the regeneration meeting at Brookside Community Centre tonight.

The meeting starts at 6:30pm and finishes at 8:30pm - a big turnout is expected so to avoid disappointment, try and get there in good time.

This is our opportunity to have a say on what happens on our estate - it's not often we all have a chance to influence what happens in Brookside so take advantage of it!
Posted by wonkotsane at 17:12

Telford & Wrekin Council have taken the bizarre and counter-productive step of cutting opening hours of the Community Recycling Centres (what most people call "the tip") in the borough with effect from the 16th of April.

When the borough council started charging for bulk waste collections, fly tipping became more of a problem which costs the taxpayer more.  Now the tips are going to open only 5 days a week which will lead to even more fly tipping and cost the taxpayer even more.

The council claims that it is cutting back opening hours to save costs but it's not going to save money in the long run.  Lots of people, on discovering that the tip is closed when they arrive, will fly tip whatever they had intended to dispose of responsibly rather than take it home and try again another day.  It's not right but it's a sad fact that it does happen and will happen even more when it's not just a case of missing the opening time by minutes or hours but missing it by one or two days.

There will be a tip open every day of the week somewhere in Telford but it may involve a several mile round trip depending on where you live.  People in Trench could find themselves having to take a 15 mile round trip past the turning for Granville to Halesfield to get rid of their unwanted sofa or people in Brookside taking a 12 mile round trip to Ketley.  It's not going to work.

Closing the tip two days a week to save money will backfire on the council and cost us council tax payers a lot of money in the process. 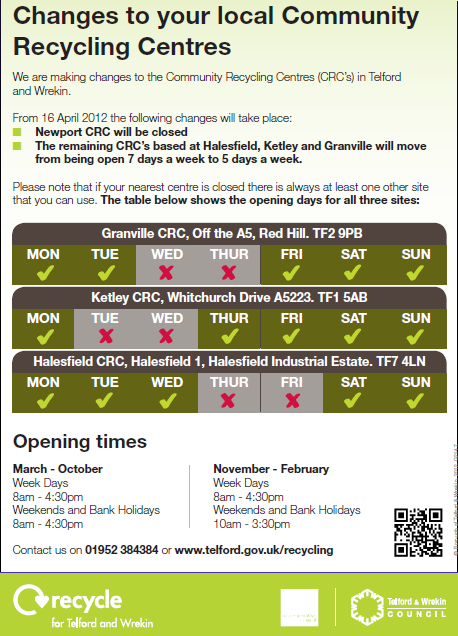 30mph speed limit sign to be replaced at Tweedale

The missing 30mph speed limit sign on the junction of Bridgnorth Road (Tweedale) and Brookside Avenue that I reported a couple of weeks ago is going to be replaced soon.

As well as the 30mph sign at the junction, the borough council are also going to put some 40mph repeater signs on Bridgnorth Road to emphasise the difference between the two limits.

Sadly they won't put 30mph repeaters on Brookside Avenue because everyone should know that it's a 30mph road.  Judging by the number of cars and motorbikes that use the road like a grand prix track, that's possibly a big assumption.
Posted by wonkotsane at 19:07

Below is a list of courses being run at Brookside Community Centre during the summer term.  Not many opportunities for people who work during the day I'm afraid.

This is a quick reminder about the second part of Severn Trent's planned works in Brookside on Thursday.


Severn Trent's contractors don't expect the water supply to be cut off but there is a possibility that it might go off or you may experience low pressure.
Posted by wonkotsane at 07:39 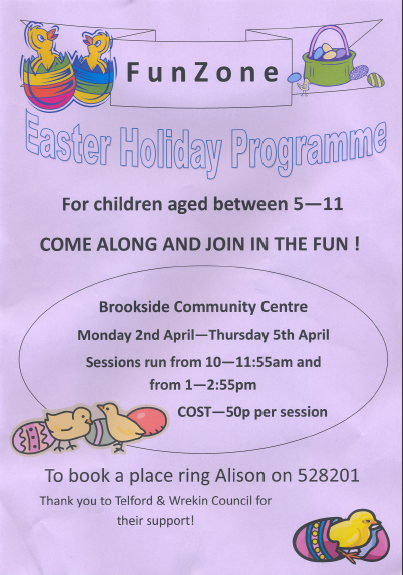 There is a meeting tomorrow evening at Brookside Community Centre at 6pm about the regeneration of our estate.

This is an open meeting with officers from Telford & Wrekin Council, Councillor Shaun Davies, Councillor Arnold England and Brookside Improvement Group so that we, as residents, can tell the council what we want out of the regeneration.


Please do make the effort to come to the meeting and put your views across.  What happens as part of the regeneration is down to Brookside residents to decide and it's not just about buildings, it's about social regeneration as well so if you have ideas about how the lives of local residents can be improved that doesn't involve knocking down or putting up new buildings, make sure you come along and tell everyone.

If you are unable to make the meeting tomorrow or you don't feel able to speak in that environment, you can send me your comments and I'm more than happy to pass them on.
Posted by wonkotsane at 06:51

What are your children doing at the park?

We took the kids to the park by Windmill School yesterday for half an hour and I was surprised by the amount of rubbish everywhere.

While we were at the park, myself and one of my sons decided to pick up as much of the rubbish as we could in and around the park.  And we picked up a lot of rubbish.  Cans, bottles, chip wrappers, ice cream wrappers, sweet and chocolate wrappers - we could have filled a couple of bin bags with what was in the bark, let alone what was on the grass around it.

While we were there a young lad emptied a bottle of something over the end of the slide to try and clean off the sticky stuff that had already been left all over the slide and then chucked the bottle on the floor.  I explained that we had just been cleaning up the park and asked him who he thought was going to clean up his rubbish.  His answer: "Dunno ... councillors"?

I asked him to put the bottle in the bin several times and to be fair to him, he did pick it up and was going to throw it in the bin until one of his friends took it off him and chucked it on the grass again.  In the end my son picked it up and put it in the bin, a 9 year old setting an example to the 12 year old litter lout.
Posted by wonkotsane at 19:39

A442 being repaired tomorrow night

Temporary repairs are finally being carried out on the A442 Queensway (the Eastern Primary) tomorrow night.


I reported the potholes that had appeared in the carriageway and slip road between Randlay and Stirchley about 6 weeks ago and after inspecting the road, Telford & Wrekin Council have declared them dangerous.  Temporary repairs will be carried out overnight tomorrow and permanent repairs later in the year.


The damaged road surface on Randlay Avenue around Arundel Close and up to the new Randlay local centre that I reported last year is also due to be repaired (finally!) before the end of March.
Posted by wonkotsane at 18:14

Leaflets should have gone to every property in Brookside over the last week or so from Severn Trent advising of water works.

The work to clean the mains pipes will be carried out on the 22nd and 29th of March and the water supply to the estate will be turned off for a period of time between 9pm on the 22nd and 4am on the 23rd.  I have been advised by Severn Trent's contractors that while the water supply could be off for the whole period, they are aiming to turn it off only between midnight and 2am.

There is a possibility that the water supply could be turned off between 9am and 4pm on the 29th while the mains pipes are being flushed but the contractors expect low pressure at worst.

A Stirchley couple had a lucky escape last night after a faulty dishwasher caught fire while they were in bed.

They were woken by smoke alarms going off at their home in Buttercup Close and called the fire brigade who gave them advice while the crew were dispatched.

Both were safely evacuated by the fire crew and treated for smoke inhalation.

This is just another reminder of the importance of ensuring your smoke alarms are working. Too many lives are lost unnecessarily because of faulty smoke alarms.
Posted by wonkotsane at 20:54

The travellers who seem to have taken a liking to the Madebrook Pools in Stirchley were back again this morning.

Every time travellers set up an illegal camp anywhere on council land it costs thousands of pounds to move them on and clean up after they've gone.


I reported these travellers to Telford & Wrekin Council this morning so the laborious and expensive process of moving them on should have already started.  There is a council-run traveller site near New Works less than 4 miles from Stirchley and a privately-run caravan site in Tweedale less than a mile and a half away.  There is no reason why these travellers need to set up an illegal camp in a nature reserve.
Posted by wonkotsane at 19:20

Whilst chatting to my barber at the weekend, he told me about the advanced driving test he's studying for.  "Do you know," he said "there's no speed limit sign as you come up from Tweedale onto Brookside Avenue - I notice these things now".


I'm obviously not observant enough because he's right and I've never noticed it missing!  Not only is there no speed limit sign to tell you that you're coming from a 40mph speed limit on Bridgnorth Road into a 30mph limit on Brookside Avenue but I can't see where such a sign might have been.


I remember my mother warning me about the 30mph speed limit when I was learning to drive mumble 17 years ago (I was approaching the mini roundabout a bit fast I think) so there was definitely one there then but there is no sign of one now.

I've reported the missing sign to the council this afternoon and they will check where the speed limits meet and arrange for a new sign.
Posted by wonkotsane at 15:05

The repairs to the A442 around Stirchley Interchange that I asked for have been delayed due to problems with the legal paperwork.

Repairing the road requires lane closures so legal notices have to be published and an order made temporarily closing the road for the repairs.

I am told that the repairs are now expected to take place in around 10 days.
Posted by wonkotsane at 14:03