Due to anti-government strikes being held on Wednesday, public services in Telford & Wrekin are going to be disrupted.

Wheelie bin and recycling collections are expected to be disrupted and Telford & Wrekin Council's advice is to leave your bins and boxes out as normal and if they are missed they will be emptied as soon as possible.

The Civic Offices are closed to the public and the highways team won't be taking calls although if you have an emergency (big holes appearing in the road, damage to bridges and subways, etc.) you can contact 01952 384859 for assistance.

Stirchley library will be closed on Wednesday but the Stirchley & Brookside Parish Council office will be open.

For up-to-date information on how the anti-government strikes are affecting services, check Telford & Wrekin Council's national strike page.
Posted by wonkotsane at 22:09


The Ramblers Association are marching on Shropshire Council's offices today in protest at cuts of up to 40% to the budget for footpaths and rights of way.

Stirchley &amp; Brookside Parish Council was one of the founding members of South Telford Rights of Way Partnership (STROWP) which is an excellent model for the Ramblers Association to adopt for Shropshire. I spoke to our parish clerk this morning for some history on STROWP as I was aware of the work it currently does but not of how it came into being.  I was surprised to learn that it was set up some 20 years ago to fight against foothpath closures by Telford Development Corporation (TDC) who were building on vast swathes of green space that is now south Telford.  The group has evolved over the years into its current form where it is more concerned with promoting the walks around south Telford and ensuring footpaths are properly maintained.

STROWP produces leaflets for self-guided walks around south Telford as well as at least one guided walk for fundraising.  The parish councils involved - Stirchley &amp; Brookside, Madeley, Dawley Hamlets and The Gorge - fund a part time project officer for STROWP who organises these events, surveys rights of way and co-ordinates maintenance and repair jobs by Community Payback and volunteers.

The partnership works really well for the parishes involved, promoting the walks in south Telford, keeping the footpaths well maintained and informing people about areas of local historic interest.  It costs about £1 per household per year to fund the Stirchley &amp; Brookside's contribution to STROWP which really isn't very much money for such a valuable service.  The idea could easily be transferred to Shropshire - the parish councils that have a lot of footpaths which are likely to suffer most from budget cuts could collaborate with each other to form a similar group and co-ordinate volunteers.

I was interviewed by BBC Radio Shropshire this morning about this very subject which was apparently airing this afternoon.  If I can find a listen again link I'll post it here!

A litter of Chihuahua/Jack Russell cross puppies have been stolen from the Three Furnaces at Tweedale - 2 boys and 3 girls, one black and white and 4 black and tan.

The puppies aren't even eating yet so their health is at serious risk.  If they are away from their mother for too long they won't survive.

If you have any information, please contact Pete Thomson or Ash Kibby at The Three Furnaces on 01952 588521.

Update:
The puppies were returned to the Three Furnaces under cover of darkness, presumably by the thieves.
Posted by wonkotsane at 21:58

This lunchtime, I saw a TWS "rapid response" pickup pull up partly on the pavement, partly on the road in Oakengates while the driver and passenger went to Subway.

As you can see from the picture below (click for a bigger version), the pickup is parked on the zigzags for the zebra crossing. 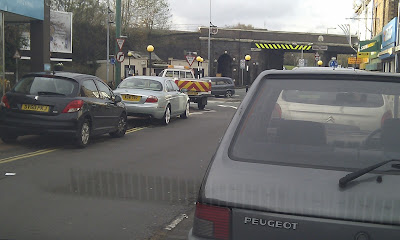 I've checked the exemptions in the Zebra, Pelican and Puffin Pedestrian Crossings Regulations and General Directions 1997 and would you believe, parking on zigzags because you want a sandwich and don't want to walk from the 200 space car park 50 yards round the corner doesn't seem to be on the list?

What's the safety of a few pedestrians compared to the inconvenience of having to walk 50yds to get your lunch?  A glaring oversight I'm sure you'll agree but until the Secretary of State for Transport rushes through this vitally important change to the law, the TWS driver was breaking the law.  I've sent a copy of the picture to TWS for their comments.
Posted by wonkotsane at 13:24

Community spirit is alive and well

Being a parish councillor isn't all about getting fly tipping cleaned up and street lights repaired, I had a phone call this afternoon about a lady who's been sitting on the cold, wet footpath in the same spot in Birchmore for the last two days.

The police have been to see her to make sure she's ok, she's known to them as she has some mental health issues and they are taking her home and will keep an eye on her.

This is the kind of community spirit that does exist in Brookside but is often overshadowed by the negative aspects of of living in Brookside such as antisocial behaviour and crime levels (which are actually not as bad as people perceive them to be but that's one for another day).  It's good to see people in Brookside looking out for each other.
Posted by wonkotsane at 16:21

These pictures were taken on my mobile phone so not the best quality at full size but good enough to see how great the fireworks were.

Well done to Telford & Wrekin Council, Wrekin Housing Trust, Brookside Improvement Group, Brookside Xtra and everyone else involved in making this a success.