Last week, Telford & Wrekin Council announced that their cabinet would be meeting to discuss formally objecting to the proposed creation of a Bridgnorth & Telford South constituency, incorporating Bridgnorth, Much Wenlock, Broseley, Shifnal and Albrighton as well well as most of what is in today's Telford constituency.

For the most likely reason for the objection, you need to look at the party political aspect.  David Wright's majority has decreased every election and last election, just 981 votes separated him from his Conservative rival.

The Ludlow constituency, of which the old Bridgnorth district is a part, is traditionally Conservative-voting.  By including those areas in David Wright's constituency, the chances of Labour holding the seat are pretty slim and of course Telford & Wrekin Council is a Labour-controlled council.

How interesting that Telford & Wrekin Council is considering a formal objection, on our behalf, to the proposed new Bridgnorth & Telford South constituency on the basis that having two constituencies will tear the town in two.

I'd like to advance the theory the Labour-controlled council is more concerned about lumps of the Conservative-voting Ludlow constituency joining the Telford constituency and depriving the Labour MP, David Wright, of his increasingly slim majority than over Telford being 'torn apart'.

If Telford & Wrekin Council wants to object to the proposed boundary changes it should do it for a valid reason like the impracticality of an MP covering two local authority areas, not party political reasons.

I have just spent an interesting evening with one of my neighbours carrying out a survey for Brookside Improvement Group in Blakemore.

The survey is part of BIG's contribution to an initiative involving Wrekin Housing Trust, Telford & Wrekin Council and Keep Britain Tidy (amongst others) and will also help BIG provide input to the regeneration plans for Brookside.

There were no real surprises in peoples' opinions about the estate or their street apart from one lady who said she wouldn't change anything about her street!
Posted by wonkotsane at 21:10

Twenty minutes to respond to 999 call

On Sunday we had an incident in Briarwood involving around 30-40 kids of varying ages from mid-teens down to 6 or 7 years old.

Personally, I don't think 20 minutes is an acceptable response time to that incident.  I have contacted the police to ask for an explanation and to ask them what plan they have for dealing with the increase in anti-social behaviour in Brookside.
Posted by wonkotsane at 07:11

Shropshire Star: Townspeople Have No Affiliation With Ludlow

I know this isn't specifically about Brookside but it's kind of relevant as the Boundary Commission for England has proposed changes to the Telford constituency that will see Much Wenlock sharing an MP with Brookside. It also shows how detached from reality councillors can become if they're not kept on their toes!

Townspeople Have No Affiliation With Ludlow (£)

I am surprised at Much Wenlock Town Council's decision to lobby the Boundary Commission for England against the proposal to include the town in a new Bridgnorth and Telford South parliamentary constituency on the grounds that the town has more in common with Ludlow than Telford.

I grew up in Much Wenlock and my family have lived there for generations. I have never even been to Ludlow, let alone felt any affiliation to it.

When I lived in Much Wenlock, if we said we were 'going to town' it meant Shrewsbury. If we didn't go to Shrewsbury it was Bridgnorth instead, but never Ludlow.

If there is a case for Much Wenlock to be linked to a different constituency to Telford then maybe Shrewsbury & Atcham would be a better fit but as most people in Much Wenlock work in Telford, I would suggest that there are more links between Much Wenlock and Telford, not Ludlow.

The proposed Bridgnorth & Telford South constituency is flawed because it crosses local authority borders but on the other hand it makes sense because of the close ties with Telford.

One thing is for sure though, nobody in Much Wenlock apart from the councillors have an affiliation with Ludlow

The father and daughter who sadly died in Briarwood earlier this year were killed by carbon monoxide poisoning, according to the inquest into their deaths.


The inquest found that they were killed when an unattended chip pan set on fire, filling the house with carbon monoxide.  The battery had been removed from the smoke alarm.

The house is only a few doors away from where I live and we used to see the girl bobbing along the top of our garden fence on her dad's shoulders.  Sadly not any more and it's a tragic waste of two lives, made all the more tragic because it was completely unavoidable.  All it would have taken was a working smoke alarm.
Posted by wonkotsane at 19:42

I have today reported a fly-tipped armchair on the footpath between Birchmore and Burnside.

We have some budding arsonists in Brookside at the moment and with the nights drawing in there is an even greater chance of abandoned sofas and mattresses and the like being set on fire.  If you spot fly-tipping, you can either report it yourself through the council website, by phone on 01952 384384 or contact me with the details.
Posted by wonkotsane at 17:59

I had to call the police out to the new park outside Windmill School again today after my children came running home to tell me that youths (or "yobs" as one described them) were using aerosol cans as flame throwers, trying to set fire to a bench.

Let's just forget about the fact they were trying to set fire to a bench and concentrate on the safety aspect - they were posing a massive risk to their own safety and the safety of the people around them.  If you've ever wondered what happens when an aerosol can meets fire, watch this video:


Now imagine the can in a child's hand.
Posted by wonkotsane at 22:54

Spotted at Windmill School the other day ... 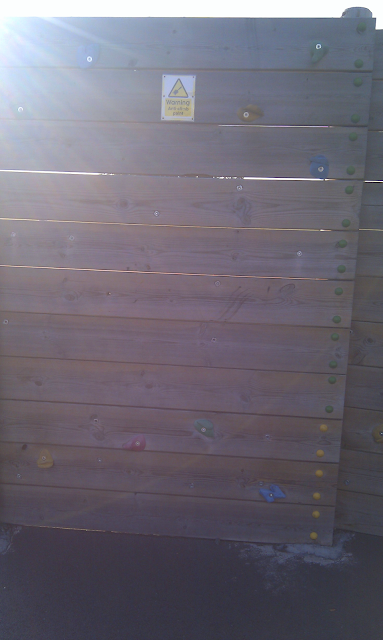 ... anti-climb paint on a climbing wall.
Posted by wonkotsane at 20:28

Letter in Shropshire Star: Data use is flawed

Back in December 2009, the Times was forced to change some adverts it had put up in the London Underground claiming that the Northwest Passage had been opened to commercial shipping for the first time that year.

The Northwest Passage is a series of shipping routes through the Arctic sea along the northern coast of Canada and Alaska.  It has been used since the 1930s for commercial shipping and going back further was used by Vikings and others up until the mini ice age in the 15th century.

Here is a letter of mine that was in the Shropshire Star last night in response to an article making the same false claims as the Times.

Data use is flawed

The Shropshire Star reported (Sole Brit boffin in iced sea link study, September 30) that the Northwest Passage is 'usually frozen solid and blocked to shipping' and that 'it has become more passable in recent years as ice has melted'.

Presumably these quotes were lifted directly from a press release written by whichever environment group is behind this study because these are the same false claims that got The Times a slap on the wrist for its advertisements on the London Underground in December 2009.

The Canadian government has been licensing commercial shipping in the Northwest Passage since the 1930s, not 'in recent years' as environmentalists try to claim.

The Vikings also navigated the Northwest Passage 1,000 years ago using their little wooden boats, rather than the big metal icebreakers that are required now.

The Northwest Passage has been freezing and melting for centuries, all part of a natural cycle that has been going on for millennia and will go on for many more.

The climate isn't changing any more than it usually does.

We are just getting better at measuring changes over smaller time periods to the point where the data 'scientists' are using to make their dodgy predictions is completely useless.

You wouldn't calculate the risk of a driver having an accident based on five minutes of their driving history and we shouldn't be calculating the risk of catastrophic changes to our 4.5 billion-year-old climate on a decade or even a century's worth of data. That's not science.

I spent today at Progress House with the other parish councillors for a Visioning Day.

The purpose of the Visioning Day was to start work on a new parish plan by identifying issues and potential solutions and sharing any other ideas that we think might improve the service the parish council, borough council and other agencies provide.

As well as our own experiences and feedback from residents that have spoken to councillors, we also used information gathered by Brookside Improvement Group at a couple of events the group held.  I wandered round with a clipboard myself at one of them gathering the information so I know it's of good quality!

It will take quite a long time to produce a draft, mainly because we had so many ideas.  But once it is produced it should be put out for consultation so residents can tell us whether we've got it right or not.

If everything we discussed and suggested is delivered, I think we would have some of the best services in the country.  If only half of it is delivered we will have the best services in Telford & Wrekin.  Some of the things suggested are really quiet innovative and Stirchley & Brookside will be setting an example to other parish council's all over the country if they all make it into the plan and are delivered.
Posted by wonkotsane at 22:54