Broadband internet is in the news a lot at the moment, with complaints about companies advertising speeds it's impossible to get and £8m or so of investment in broadband planned for Shropshire (including Telford & Wrekin).
You may not know this but we're actually quite lucky in Brookside when it comes to broadband internet in terms of choice of providers and the speeds you can expect. 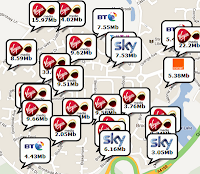 In all, five companies are able to provide broadband internet connections in Brookside.  Other companies will be able to provide you with broadband in Brookside but they will use the equipment owned by the five companies below:
All of these providers except Virgin use BT's exchanges to provide your internet connection over your BT phone line.  Virgin has its own cable network - your house is connected via copper coax to one of those green cabinets you see dotted around the place which are in turn connected by fibre optic to their exchange in Central Park, St Georges.
Which broadband providers you can choose from and what your connection is like depends on whether you are in a cabled area and which BT exchange your line is connected to.
Read more »
Posted by wonkotsane at 20:01

A 32 year old man was mugged by three men on the Silkin Way last week.

According to the report on the Shropshire Live website, the man was approached by three white men at around 11pm, one with a bike who then attacked him without warning before stealing his rucksack containing a laptop, personal documents and cash.
Here is some free advice for you all: don't walk down the Silkin Way at night on your own with a laptop and cash in your bag.  The footpath is unlit, the police and park rangers don't patrol it, it is rarely used after dark and if you get into trouble, nobody will hear you asking for help.

There is a description of the attackers on the Shropshire Live website.  If you have any information about the incident, you can contact Crimestoppers anonymously on 0800 555 111 or give me the details anonymously.

Brookside no longer part of Stirchley on Satnavs!

Brookside is no longer part of Stirchley on the mapping system used by all the major Satnav manufacturers and online mapping companies, including Google Maps!

Mapping company Tele Atlas yesterday confirmed that they had changed their mapping data after I reported an error to them that meant addresses in Brookside were listed as "Brookside, Stirchley, Telford".  Satnavs and online mapping services will be updated the next time manufacturers and suppliers update their software using Tele Atlas' updated maps.
Posted by wonkotsane at 10:39

We had a very encouraging estate walkabout with some Telford & Wrekin borough councillors and officers today to show them the best and worst of Brookside.

Earlier in the afternoon they had a meeting with Brookside's two borough councillors, Arnold England and Jackie Loverage, and then came on a walkabout with myself, another parish councillor, a couple of members of Brookside Improvement Group and the owner of most of the businesses in Brookside centre.

It was encouraging for two reasons.  Firstly, because the councillors and officers could see first hand just how run down Brookside has become and secondly, because as they were going round they were visualising the improvements that could be made.
I don't think Telford & Wrekin Councillors (other than those in Brookside of course) appreciated quite how desperate we are in Brookside for our fair share of the regeneration that has been carried out and is planned elsewhere in Telford.  The will seems to be there but whether they can find the money to do the things they have talked about doing remains to be seen.
The first thing the visiting dignitaries were shown was the youth club and the "condemned" (but seemingly perfectly safe) former home of Chipmunks day care centre which makes up the bulk of the building.  The abandonment of so much space that could be put to good use for the community is criminal and nobody seems to know what made the building so dangerous it had to be condemned in the first place.

We then moved on past the Green and on to the Field behind the Windmill School.  I pointed out to as many people as possible that these green spaces right in the middle of the estate are pretty unique and a valuable resource for residents.  We walked the footpaths around the outside of the field (made possible by me getting the hedges cut back recently!) and down the long path that runs down the middle of the estate alongside Bishopdale, taking in the former Brindleyford School site.

We finished off back at the Brookside shops which, it was agreed, look pretty run down and intimidating.  The owner of the shops has done what he can to make the place more inviting but nothing short of a bulldozer is going to improve the centre.

What was interesting was that the non-Brookside councillors and officers were noticing graffiti and rubbish that we didn't even see.  We realised that it's become such an integral part of Brookside that we don't notice half of it!

I have no idea what the timeline is for any decisions to be made or any consultations about what improvements should be made.  Hopefully it won't be too long but I would be surprised if anything happens this financial year.
Posted by wonkotsane at 22:15

EDL should postpone their march in Wellington

A couple of weeks ago the Shropshire Star published a letter of mine explaining why I think it is wrong to try and stop the English Defence League from marching in Wellington this weekend.

I still firmly believe in the EDL's right to peaceful protest and fundamentally disagree with those who are still calling for the protest to be banned.  However, in light of the recent civil unrest in London, Birmingham and other towns and cities not that far away from Telford, I believe the responsible thing to do would be for the EDL to postpone their march.
There is undoubtedly going to be trouble at the weekend in Wellington because Shropshire & Telford Trades Union Council have organised a counter-protest which will attract the left wing thugs from Unite Against Fascism  and the Socialist Workers Party who are responsible for starting most of the violence at EDL marches.  I am concerned that those with an even more violent disposition will use the trouble that will start at the EDL march to emulate the rioting and looting that's happening in London and Birmingham.
I have contacted the EDL through their website and urged them not to cancel but to postpone their march in light of the above.  I haven't had a response and I don't expect they will take any notice of me but nothing ventured nothing gained as they say.
Posted by wonkotsane at 07:05

There are NO riots in Telford

West Mercia Police are updating their Twitter feed regularly and confirm that there are no problems reported anywhere in the West Mercia force area and that includes Shropshire.
False reports of disturbances are extremely unproductive and irresponsible.  There is a risk that people will turn up at places where false claims of trouble are put about and not finding any trouble, will cause some.
If you want up-to-date and accurate information, don't listen to the rumours posted on social media, check the West Mercia Police Twitter feed.  Your next door neighbour's postman's friend's milkman is not the best source of information on these things!
Posted by wonkotsane at 22:28

Anti-social behaviour in Briarwood and Beaconsfield

Tonight was my first night home after a week away in Surrey on a training course and I had the pleasure of calling out the police to yet another disturbance in the Briarwood/Beaconsfield area.

Last night was three drunken youths in Briarwood shouting loudly, using bad language and punching a van.  Thursday night is was drunken youths shouting and fighting in Briarwood late at night and again in the early hours of the morning.  Last week it was drunken youths shouting and trying to kick in my neighbour's fence until I shouted at them and they ran off.  The week before that the door to one of the flats in Beaconsfield was kicked in.
The common factor in this anti-social behaviour is that it's drunk young people.  It's usually around about kicking out time from the pubs and private property is usually attacked.
This has become a regular occurrence in this part of Brookside - it is happening two or three time a week and I suspect that the same people are responsible on most occasions.  I have asked the Parish Clerk to contact West Mercia Police and ask them what they are planning to do about it.

If you have any information about the people causing trouble in this or any other part of Brookside, you can report it to the council, the police or you can tell me confidentially.
Posted by wonkotsane at 16:02